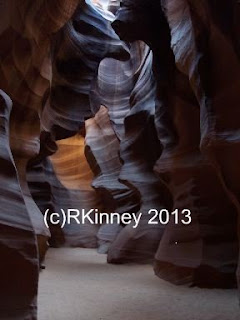 Antelope Canyon was on my Bucket List before Bucket Lists were cool. I saw a postcard of the canyon about 8 years ago,bought it and used it as a bookmark. I thought it was beautiful and wanted to go there 'some day'. Well 'some day' came this month as mom and I emerged from our aborted Southeast Utah intervention (see blog post Mom's coming and she's a crackpot.. for that story).

We made a quick jot up to Page, Arizona on our way to Sedona to try and catch a glimpse of the famed slot canyon. After reading many reviews, we opted to take the Chief Tsosie tour. The canyon is on Navajo land and you can only enter with a Navajo guide. The price for the tour was about $8 higher than going to the parking lot and picking up a guide there. Chief Tsosie's picked us up at our campground, wisked us pass the security gate at the parking entrance that had a line of cars and unto what appeared to be a sandy creek bed road that led down to the canyon entrance. From the parking area to the canyon entrance was a very bumpy, fishtailing 10 - 15 minute drive. 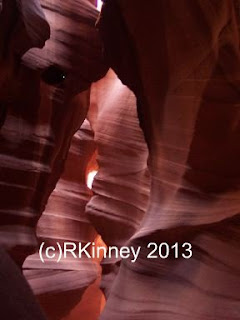 Our guides name was Terri, a Native American and a school teacher. She came off a bit brisk at first when one of the touries asked a kind of 'you people' question, but then she made her point and moved on. She was actually fabulous and spent a lot of time explaining the features of the canyon, as well as, answering all of our questions regarding Native American culture. I found that just as interesting as the canyon itself. She was quite open and patient with us to the point that our tour ran late. That turned out to be a blessing. We were told before we went into the canyon that it was not likely that we would see any light beams hitting the valley floor because of the time of day and time of the year. Our delay kept us later and because I was lagging behind clicking away on our way back through I got to see 2 light beams almost hitting the floor! Bonus! It really made my day. It was a very neat sight. 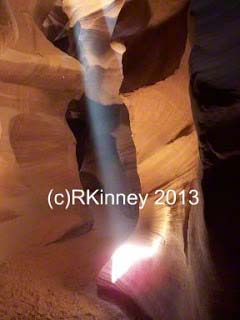 We went through the canyon, out the other side, talked and then back through again. I saw several folks with some of the guides from the parking lot that were in and out way quicker than we were and they didn't appear to be getting the info that we were. We were on a 10:30 tour. When we went in the canyon it was not very crowded but on our way back out .. after noon it was packed. It is a slot canyon, which means it is very narrow so there was a single file line going each way. It had to be extremely hard for the new folks coming in to get pictures without people in them. I am happy we chose the tour company and time that we did.

The canyon itself was everything I had hoped .. light playing on the smooth curves and narrow, red walls of the sandstone canyon. Very cool indeed!
Arizona Travel Utah