A freaky dream had me up at sunset and ready to move on.  A birder suggested Florida's St. George Island as a 'do not miss' place to bird.  My 'friend' June, suggested that Destin was a place that I needed to drive through and see.  So I set out from Gulf Shores, AL south on US 98 which goes through Destin against my gut feeling which said take the interstate & drop down.  I assumed my 'friend' would not steer me wrong.   Destin was beautiful driving into ..  white sand, beautiful water, marina's the whole bit .. then you get into the city .. it's spring break, it takes 3 changes to make it through a light.  I can put the rig in park, get up & get myself a drink, then a snack, then Trailer Life .. the traffic was horrid.  It was horrid through Panama city.  It took 8 hours to go approximately 230 miles!  It was awful and I was ready to bail out of Florida and head west.  I tried to envision driving in Utah as I sat through light after light ...  wide open spaces, pretty red rocks, and not a vehicle on the horizon.  I turned on Classical music to calm myself as I had to brake yet again.  Not a pleasant drive, but I am glad that I did not give up and head west.

Once I hit Mexico Beach, everything changed.  The traffic was gone, I began to see pine trees, the towns were small, the beaches uncrowded, there were signs for bears and not a high rise in sight.  I almost thought I was someplace out west.  Who knew Florida had bears and really tall pine trees?   This was a different world than the craziness of Destin and I was happy for the change.

The island campground had been full, so I ended up about 25 miles further down the coast outside the town of Carrabelle at Ho Hum Rv park, a small park along a quiet stretch of  waterfront.  If you aren't on the water, the sites are a bit tight and just sand but with wifi and cable.  The beach here was not huge, there are not waves crashing in and the water is brown instead of the pretty blue by Destin.  It's just a calm strip with plenty of water birds and waders hanging out. 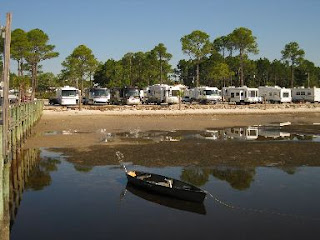 I drove back to St. George Island the next day to check out the birds.  A front was coming through and it was very cold and windy.  Birding was not great and I had to wear gloves to hold my binoculars.  (There were kids on the beach in swimming suits!)  The island has nice beaches, vacation homes and a lighthouse. By afternoon, it warmed up and I headed to Apalachicola, an interesting town about 9 miles from the island.  I found this to be a refreshing little town.  I get tired of little tourist towns that all have the same stores with the same tourist stuff.  Apalachicola had a little of that but for the most part it was unique items from local artist.  The Malt shop was getting rave reviews from passerby's, as was the chocolate store  .. I stuck to my guns and just had a piece of salt water taffy .. okay so I had two.  Oysters are a big deal in this area.  In fact, 90 % of the oysters from Florida are suppose to come from this area.  There are mounds of oyster shells in this town.  I did not partake of the local seafood but my fellow campers said it was excellent. 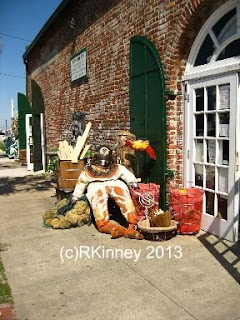 The whole Forgotten Coast area looked interesting and begged discovery, though I could only get a space for 2 nights.  The area deemed the Forgotten Coast runs from Mexico beach south to Carrabelle.  Mellow, uncrowded, lots of places to bird and hike, good food, not a bad place to hang for a while.  This is an area I would definitely like to return and spend more time though I won't be taking Hwy 98 through Destin to get there!
Beach Eastern US Florida Travel