Dinner with a Pirate

I really wasn’t sure what to expect when I met Captain Horiato Sinbad for dinner in Morehead City, NC.  He is a pirate, privateer, boat builder, engineer, adventurer, writer, and moviemaker. He built his first ship at 11 and took off to sail the West Indies at 16, returned to his home in Detroit to build a pirate ship in his backyard at age 24. He has received Privateer commissions from a President, a couple of North Carolina Governors, has been featured in a number of articles and shunned by Disney (Guess they found a real pirate intimidating). I had heard stories of he & his mates capturing local waitress, scaring tourist with cannon fire and even toying with the Coast Guard. Not the typical experiences of folks that I have dined with to say the least. 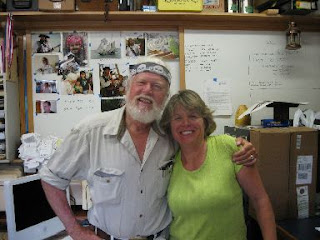 I half expected a guy with an eye patch and a wooden leg. I fully expected a big guy that, as they say, ‘swore like a sailor’. I did not expect the soft spoken, gentle spirited, intelligent and driven man that I met. He and his 1st mate, Lt. Terry Brown, were quite patient with me and my barrage of inquires about boats, movies and all things piraty.. Sinbad and Terry were kind enough to allow me to come out and see their boat and his moviemaking base the next day. In addition to boatbuilding, participating in historical reenactments and delighting tourist, Sinbad has written a book called the Sword of Tortuga. He is currently making a movie based on this book. So far it is an independent film that he is producing. He is driven to bring this project to the big screen and I certainly believe that he will.

I thoroughly enjoyed my time with Captain Sinbad and Lt. Brown. The pirate ship was a little cozier and had a bit more movement to it than this land lover could handle but I would have dinner with these Pirates in any port.

Sinbad says “You aren’t a real pirate unless you have the Pirate ship”. He’s got the ship, the girl, the clothes, the parrot, the sword and quite an interesting story. For more information on Sinbad or the Sword of Tortuga check out his site here.
Eastern US Interesting People Travel