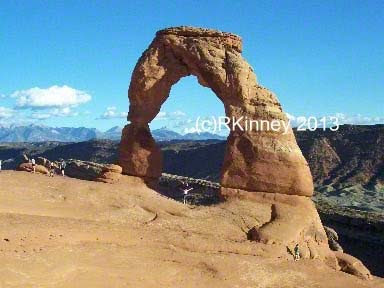 The Delicate Arch hike is pretty much obligatory if you go to Arches National Park. It is the most famous arch in the park, its featured on the Welcome to Utah signs and their license plates. It is a 3 mile round trip hike with around with a 480’ foot elevation. The lighting is best for photographing the arch in the evening. So this being my sister’s first trip to the area we had to do it.

Having done this hike before, making sure I had enough water was a priority. My first trek to the arch had been at high noon on a warm August day with an 8 ounce bottle of water. I was ten years younger and still thought I might have to be medevacted off the trail. I learned a valuable lesson about respecting the desert heat that day. So this time, I armed myself with two big bottles of water in my waist pack. My sister chose to take a small bottle despite my urgings for her to take more. Whatever … we are going at sunset and not high noon.

When we got to the trailhead, it was so packed that we could not park, so mom took over the driving duties as we sat in traffic and Wen and I headed up the trail. We thought this beautiful midweek September evening would be a great time for a hike. Apparently everyone in a 100 mile radius did too! Some of the tour buses had gotten an earlier start and were on their way down the trail as we were going up. There were people of all creed, color and age coming down the trail. Some older folks even had canes. I wanted to take a picture of them to show my mom who had played the ‘age and sore hip’ card to get out of the trek, but I resisted. My main goal was to get up to the arch before sunset and before the tour bus group that had just started to unload at the trailhead. I view hiking as a solitary or small group activity. Not something you do with 40 plus people!

The first part of this hike is pretty easy. It winds and rolls a little but there is no real elevation gain. The middle part of the hike proves a little more difficult as you hit a slick rock slab that seems to go straight up. 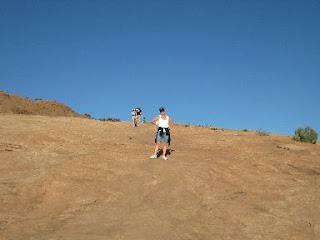 This isn’t just a small rock slab .. it goes on and on and on. Once we hit the slab, we had a good vantage point of the trail below. As we sucked some wind and checked out the view, I could see the mass of touries coming! No time to suck wind, we had to keep moving. Our conversation waned as the elevation grew. Once you make it up the slab it levels out but you continue over sand and slick rock with cairns as the trail marker. Once you wind along a narrow ledge you are getting close. Finally, we come to sort of a narrow plateau and a crowd. Beyond the crowd sits the arch in all its glory. 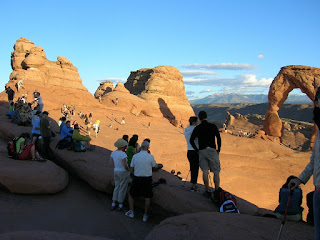 It is kind of a freak of nature. A huge free standing arch out there all by its lonesome. It is on the far side of what looks like a rock bowl. On the south side of the arch it is just drop off. The La Mountains are visible beyond the arch. The crowd hangs on the northside of the rock bowl waiting for a clear picture of the arch. 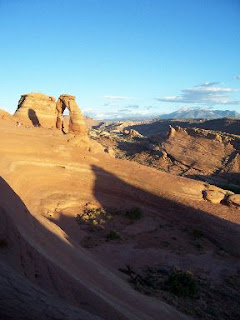 People take turns going to the middle of the arch & having their picture taken. Cheers go up when you hear, yet another water bottle that wasn’t held onto well enough, bounce its way to the abyss of the rock bowl. Wen’s water, that she so carefully saved, met this fate. Luckily I still had some to share. My camera was saved from the abyss by an attentive fellow hiker. We took pictures, sat and admired the arch and people watched until it was close to sunset. It seemed there were people from every corner of the earth up there just gazing at this arch in the middle of the Utah desert. I heard more languages being spoken than I could identify. People were smiling, friendly, patient and helpful to each other despite being different. It was pleasant to people watch here.

Not wanting to traverse the trail in complete darkness with 100 other people we headed back down the trail before the actual sunset. Going down was much easier on the lungs but harder on the knees. We made it down as the sun slipped below the rocks in the west. It was a nice evening. 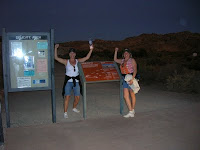 As we get in the car, I am thinking about what a wonderful thing it is that so many different kinds of people can come together and appreciate the beauty of nature. My sister meanwhile, is telling our mother that I made her ‘flipping climb Rock Everest’ and that park service would have all the money it needed if it just built a gondola for people to pay to ride to see the arch instead having to hike it.

I guess we all look at the world a little differently!
Travel Utah