I am transferring the Journal from my first year RVing to the computer and thought I might share a few Journal entries here and there. So here goes... 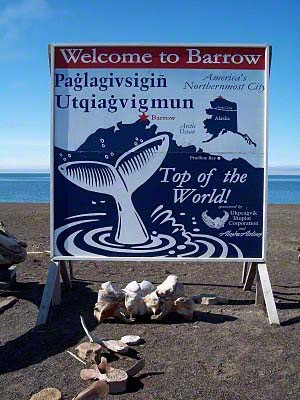 I flew to Barrow Alaska, the northernmost point in the United States. It was not at all what I expected. It was muddy, run down, all gravel streets, junk sitting out everywhere and the houses were on pilings. The ocean was very calm and pretty. The tour took us around the town, which only had one stop light by the school. We had local kids teach us some of the native american games and dances. We learned about whaling and the native way of life here and it was very interesting. I am not sure that I could live here though it is very isolated, gets 24 hours of darkness in the winter and is cold. We went to a weather research station and saw folks that had erected a plastic palm trees in their yard. Gotta love the humor of those folks. They keep meat in a hole dug down deep into the ground. They can lower it down in the hole but have ladders to go down to retrieve it. I guess you really don't need a freezer here, besides it's not like you can run to the nearest Sears store and buy one. 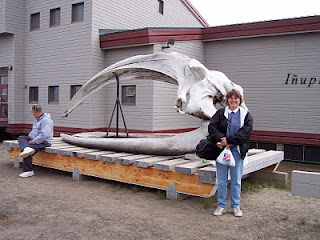 There happened to be walrus blubber just sitting in a box next to the cellar with flies on it while we were there. Lots of the locals were selling their wares at the museum. I bought some caribou antler carvings and some baleen which comes from the Bowhead whales that they hunt here.

We had lunch at Pepe’s Top of the World Restaurant. They had a limited menu but it was good. All of the supplies in Barrow have to be flown in or shipped in once the ice has melted in the summer and a barge can get there. In the winter when the permafrost is frozen they can snow mobile something like 80 miles to the nearest town. In the summer they use small planes because there are no roads to neighboring towns. The plane we flew in on was half a cargo plane and half passenger plane. I have never been on any other plane like this. When we landed it was 38 degrees and very dreary but the sun came out and it warmed up to the mid 40‘s. This IS July and it has been in the 90’s in Fairbanks!

I decided on a whim to become a member of the Polar Bear Club of Barrow, which means I had to fully submerge in the Arctic Ocean to join! Wendy and Ray from Montana also went. Wendy is turning 60 tomorrow. 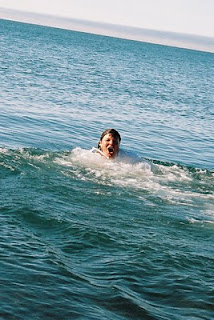 We had lunch together and talked each other into taking the plunge to celebrate her 60th and my 40th. I liked her spunk! They were spending the night here and had extra clothes. I did not, so I bought a pair of shorts and stripped down to a t-shirt since they were gonna give me a dry one of those when I got out. A dead seal lay in the water along the shoreline close to where I did this. The water was quite cold and salty but I felt warm when I got out. Yes, that's me in the pic going "Holy Cow its cold" or something akin to that. :-) I got a t-shirt and will have a certificate mailed to me. I also got a lot of applause and shaking heads from the rest of the group that didn’t go in the water. You hear about folks in the Lower 48 being members of a Polar Bear club, but taking a dip in the Northernmost city, where Polar Bears really do swim, really gives it more meaning, if you ask me!