A Day by the Salton Sea and the Wister Wildlife Area 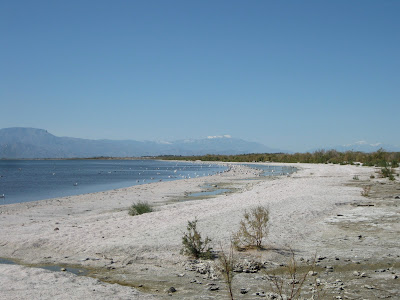 The water was glistening and looked beautiful with the snowcapped mountains in the background.  “Wow, look at all the waterbirds ... crunch, crunch, crunch what’s that smell?  Ewww.”    The views and birds looked great, until I looked down and realized the shoreline had a ring of hundreds of dead fish & I was walking on fish bones!  Then the smell caught up with me. Again .. Ewww!  Dog had been hanging back and walking rather cautiously now I realized why.  The birds did not seem to mind the smell as they snacked away on the fish!   So went my first stop on the Eastern side of the Salton Sea. The next couple stops would be the same: pretty in the distance, yet smelly.
I stopped by the Salton Sea State Recreation area Visitors Center and caught up with some folks from my park that had been kayaking on the Sea.  More dead fish there though it didn’t pose a problem for their kayaking once they were away from the shoreline.  I heard 2nd hand that the fish had died because of the unusually cold weather.  I didn’t inquire as to the cause, I just tried to avoid looking at all the carcasses.
The Visitors Center has an interesting movie on the creation of the Salton Sea and it’s environmental importance.  There is a campground with hook ups and a boat launch there as well.  I moved on south and checked out camping (and birding) at the next two state parks campgrounds down the line.  Both have nice dry camping spots large enough for any size RV right along the shoreline.  The views are great, the birds abundant but the smell was REALLY bad.  Too bad to bird very long at all, so I continued down the road. 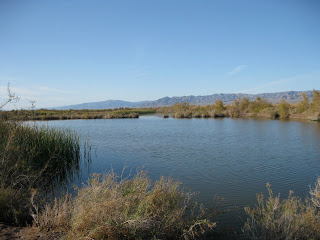 I had hoped to be able to see a Burrowing Owl on my trek and a wildlife area with mud pots was suggested as possibility of finding them. The Mud Pots were located at the Wister Unit of the Imperial Wildlife area which was right before the town of Niland which was to be the southern end of my day trip so I went and checked them out.  The Mud pots weren’t very exciting.  I didn’t find the owls but I did find a lush oasis of green and water teeming with birds and other wildlife!   The green reeds and water was such stark contrast to the desert I have been living in for last 4 months that I just felt myself just trying to suck in all the green.  What a great place.  It reminds me of Whitewater Draw (AZ) or Bosque Del Apache (NM) birding areas except without the Sandhill Cranes. There were flocks of waterbirds everywhere, just not cranes.  There were also many critter tracks in the muddy areas and I did not run into a single soul.  I didn’t get to explore as much as I would have liked because it was getting late and I had another stop to make but I certainly could have spent the entire day exploring & birding there.  There is a dry campground there, it is not overlooking the Sea, it is more like a large gravel parking lot but the area did not smell at all.   Next time I take my rig that way, it will certainly be a stop for me.  Definitely a stop for birders.  You can check out more about the Wister Unit  here.  It is one of several areas listed for birding around the Salton Sea. 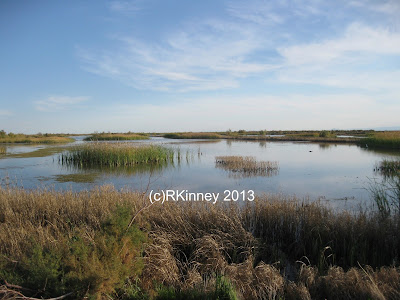