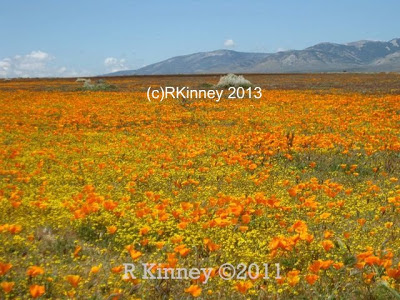 A couple years ago when I was at Antelope Canyon, I saw pictures in a book of the Antelope Valley Poppies.  They were beautiful and I immediately added a spring visit to the Antelope Valley Poppy Reserve on my bucket list.   This year it just happened that my neighbors for the winter, Dick and Rosie, make their home in Antelope Valley near Lancaster, California and invited me to park my rig at their home and take me Poppy hunting in early April.   Poppies, a spot to park and a local guide AND dog could go too... is there a cloud higher than cloud nine!?  :-) 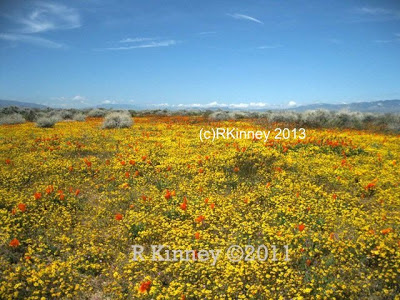 The trick with poppies is that they are very particular.   They need the right amounts of water, sun and temperatures, at the right times, to grow.  But then even if they grow they don't open if it is too cloudy or too windy.  Some of the reports from the Poppy Reserve were that the season was disappointing and that the flowers were few.  The day we set aside to go started on the both the windy & cloudy side, but as we got a little bit out of town we had glimpses of blue and sunshine breaking through the clouds.   Since the Antelope Poppy Reserve reports weren't so good we headed a couple miles to the north of there on Avenue D to see what we could see.   I was delighted when we saw our first patch of orange, even though the poppies were closed up tight in the wind I was thrilled.    Our next stop had even more poppies but they were mostly closed.  Next we headed down a two track to check out some yellow that we saw by a hillside and wow, the yellows in themselves were spectacular but there were also orange poppies at some of the places & now that the skies had cleared they were beginning to open up.   It was beautiful!  I would have been content with that spot but we continued past fields of colors sometimes yellows, some white & some poppies.  Finally, after a little trek on a dirt road we came to a huuuggee swath of poppies all open and glimmering in the sun.   It was breathtaking!  Poppies as far as we could see, blue skies, sunshine and mountains in distance.  You couldn't ask for a much more beautiful sight.  Check mark for this bucket list item....   Thanks Dick & Rosie!