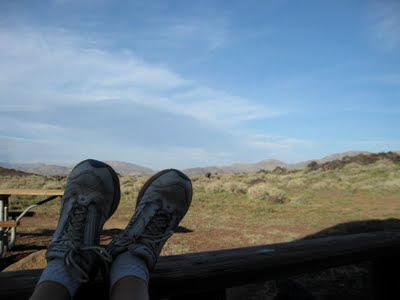 I was really getting the hang of the dry camping thing here at Fossil Falls. I was starting to really get what my boondocking buddies all talk about .. the wide open spaces, no neighbors for miles, get back to nature, smell the fresh air, read a book, listen to the birds sing kind of thing. I was getting that and loving it. Then, there is always a ‘then’ isn’t there?  Then, the wind started to pick up and pick up quickly. I went from contemplative to hopping up and down saying ‘eww, ouch, oh that hurts’ all in a matter of minutes.  I discovered that when you are sitting on an ancient lava field and the wind blows, it sends thousands of tiny cinder particles flying through the air.... and they HURT!  I scrambled to grab my chairs before they wound up in Kansas, then get dog and myself inside and get the windows closed.  I was too slow, I already had a layer of dust on everything. My slide awnings were flapping wildly. I pulled both slides in and sat down to regroup. I checked the weather and there were high wind warnings for 50 miles in either direction on Hwy 395 that were suppose to start at 10 am the next morning!! I’m thinking, 'uh oh this is gonna get worse'. The wind started getting even stronger and Bessie (the RV) started rocking and the wind was catching my AC covers in a way that sounded like they were gonna blow off any minute. It was now pitch dark and I was getting a bit concerned about our situation. Out in the middle of nowhere, all by myself, with no one to help should we get blown over... I thought, 'what the hell, at least in an RV park I would have neighbors going through the same thing.' (For some reason I find that comforting.)  When the wind hadn’t let up by 10:30 pm, I decided to try and move the RV and angle it so the wind would at least hit the front of the AC covers, which is where they were designed for wind to hit. I really didn’t want to fully angle into the wind because I didn’t want the cinders blasting my windshield. I couldn’t move a whole lot because there were sharp lava rocks around that I couldn’t see to maneuver around in the dark. After an ‘ew, ow, that hurts’ trip out into the wind to assess how much I could move. I was able to get the angle I wanted. The noise from the AC covers died down a little and the shaking of the rig improved slightly. I was a little less fearful of being blown over. I found my ear plugs and the Excedrin PM and drugged myself so I could sleep while the rig continued to sway. Despite the drugs, I didn’t sleep much. The wind died down at 6:10 am, it was barely light. I had the car hooked up and was on the road before 6:45 am... Not bad for someone who’s feet rarely hit the floor before 9 am. So much for my ‘getting back to nature’ experiment... I headed to find neighbors and full hook ups!
California Hwy 395 Travel