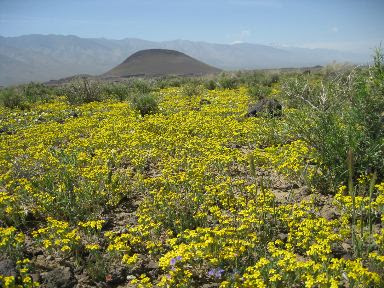 While visiting the BLM office in Ridgecrest I picked up a sheet on Fossil Falls which is about 35 miles north of Inyokern on Hwy 395. No one at the BLM could tell me if the Fossil Falls campsites were big rig friendly or not but a fellow camper told me he ‘thought’ that was where he had camper with his big 5th a few years back. Inspired by my Jawbone Canyon experience, I decided to check it out. I knew that any camping area that was only 1.5 miles down a gravel road couldn’t be too bad.
I grew a little concerned when I had to stop on the washboard road and remove someone’s spare tire that had apparently come off without the drivers knowledge.  I stopped at the first turn off on the road which happened to go to the campground to take a look at my options. I was greeted by a hiker who said, “your gonna have to unhook and drive out separately to get out of here!” That is not what you want to hear when traveling alone in a motorhome towing a car. Ahead of me was the end of the main road and a small parking lot. I am not sure I could have turned there if it were empty, but there were cars and a small travel trailer.  My only option then was to take the campground road which was not a gravel road, but an uneven, lava rock rocky, deeply rutted, dirt road.

I stopped at a wide spot by the registration and took a walk down to the Fossil falls, which isn’t really a waterfall. There used to be a waterfall and now all that remains is interesting holes and swirls and holes in the lava rock that the falls had once run over. Interesting but been there, done that, and now I just wanted to get the heck out of there without getting stuck, hurting my rig or having to unhook. 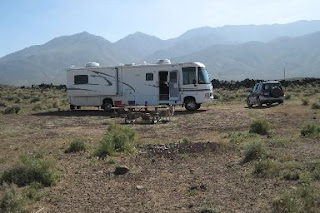 I was concerned about one of the MANY lava rocks sticking up catching a sidewall on my rig. Finally when I was almost back to the gravel road I came in on there were a couple big sites that I would fit in. I checked my verizen card and phone both and they both worked. Being a bit stressed and the sites here looking pretty nice I decided to pay the $6 camp fee and stay the night and unwind. My site was lovely. It was big, it had a fire pit and a picnic table and it was fairly level.

On my way back from paying the fee, I took a detour and followed a sign to Little Lake Overlook, which was several miles down a another gravel road.
I found FLOWERS! MIllions of flowers, mostly the yellows but whites and purples were mixed in as well. The views were beautiful and there was nobody else around. I also found a cool dry lake bed to drive on to avoid some of the rough gravel road. It had its own beauty. I was beginning to like this ‘one night stop’. I got back to my site in time to enjoy the sunset with my feet up on a bench and began to think about staying a while....