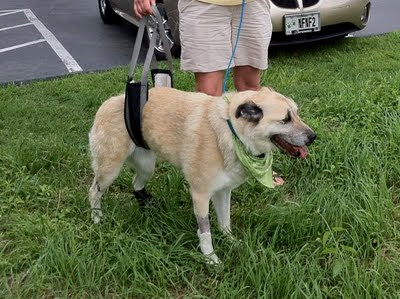 After my little ‘Come to Jesus’ incident in the mountains, I thought a trip to St. Louis to see my family might be a good idea.  I hadn’t visited in over a year and have young nieces and a nephew that I can’t get hugs from via Skype.   I was also a bit tired of the cold temps still happening in Carson City.  So on a whim, I packed up dog and the car and made the trek to the Lou.  I left in a sweatshirt with a ski jacket and when I hit Nebraska I hit a wall of heat.  It was so hot that I had to switch to driving at night because my car AC wasn’t working.  I considered turning around at this point because I am _very_ heat sensitive and was questioning the wisdom of the trying to do anything in the heat.  I keep going & by the time I got to St. Louis the heat indexes were in the triple digits!  It got better within a couple days but the plan was to visit and go before the real heat hit in July.

On Father’s Day, Dog was chasing a rabbit and collapsed.   Her entire back end was paralyzed.  Ten days,  3 vet hospitals  and thousands of dollars later, Dog was able to leave the hospital and begin rehab.  This meant we weren’t going to get to leave before the heat came and come it did.  It was one of the top 5 hottest summers on record in St. Louis.  Dog did 6 weeks of Rehab and walks with a limp, but she is walking and has adjusted well.  I stayed in the AC with occasional forays outside where within minutes I would get sick from the heat and spend hours recuperating.  My car apparently wasn’t hip on being in the Midwest either and had 7 stays in the shop!  All this made for a _very_ long summer, where I revisited that moment of pause that I had in Nebraska more than once!  Mom’s ‘3 week' guest turned into a ‘3 month with a special needs dog' guest.  Thankfully she didn’t boot us out.
All in all, I did have a great time with family and friends and my time with the ‘little people’ was priceless.  St. Louis is a nice city, that has much too offer but in record breaking heat it is not the best time to enjoy it.  I am happy to say that Dog & I both are back at home in the rig in Carson City.  It was a little questionable at times whether either one of us would make it back at all!  I’ve told my family that they can come visit _me_ next time! 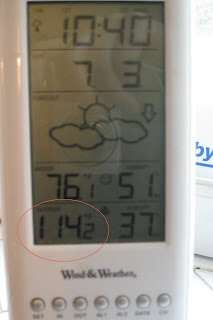