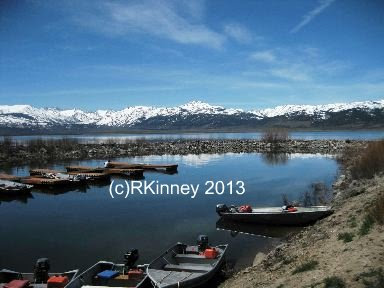 I had really enjoyed staying in Pleasant Valley but being on a time frame to pick up folks north of here, I had been watching the weather so as not to get caught in any wind storms on the next leg of my trip over the mountain passes.  I decided yet again to head out the day before the high winds were to arrive.  Unfortunately, not far out of Bishop, I was in the middle of high winds.  Eventually DOT decided to post the high wind warnings suggesting that ‘high profile vehicles’ not travel!   Of course, at this point I have had the top tipping in the wind thing going on for a bit but couldn’t find a place to pull over or to turn around.  Then again I hoped I had already been thru the worst of it & ahead would be better.  It was not, instead I hit sideways snow and changing wind directions.  I could barely see the road.  To say I was white knuckling would be an understatement.  I was drenched in sweat, couldn’t breath & could hardly pry my hands of the wheel when I finally found a somewhat sheltered place to pull over along Mono Lake.
Now the winds were pretty bad .. straight line crosswinds are never good in a motorhome but I had driven in worse coming out of Vegas a couple years ago.  This time, being a couple of years older & having to go over 3 passes that were double the elevation of Bishop, my body didn’t handle it so well.  I made it to Bridgeport Marina RV park which was only 90 miles from where I started.  90 _very_ long miles!
The next day I ended up in the ER at a hospital an hour from Bridgeport.  They surmised that I hadn’t had a heart attack .. bonus..  and should rest.  So that I did.  The manager & staff at Bridgeport Marina were delightful.  He checked on me several times to be sure I was among the living, offered to take care of Dog, have a doc come and check me out or help me with whatever I needed.   They were extremely nice!  The views of the reservoir there are quite fab too.  A reservoir surrounded by snow capped peaks, great sunsets, what more could you ask for!  It several days before I was up to drive again and 2 weeks before I started feeling back to normal.
I guess that is one of the downfalls to traveling alone.  If you get sick you’re stuck!  If you’re gonna get stuck Bridgeport Marina is a good place to be.  Thanks guys .. I appreciate your help!