Kayaking the Elkhorn Slough – Swimming with the fishes

It was a lovely morning and the fog rolled out just in time for my sister and I to push off for our much anticipated kayak trip in the Elkhorn Slough. The Slough is an important wetland area and one of the largest saltwater marshes in California. It opens to Monterey Bay at our start point at Moss Landing, which is between Monterey & Santa Cruz, CA. There are several options for kayaking on Monterey Bay but we opted for the quieter waters of the slough. Our goal was to see some of the awesome bird and marine life that make their home here. Okay –my- goal was to see the awesome bird and marine life, my sister just wanted to watch the sea lions & otters from the water!

Camera, phone, keys and binoculars on board, we set off on a nice smooth paddle. While we were still in the harbor area we saw Harbor seals, a large raft of otters and dozens of sea lions crowded onto one of the docks. The tide was coming in so we decided to just take a nice leisurely float in a for a few miles before paddling back. As we were floating, I had a Harbor seal pop right up next to the boat and just look at me. It was close enough I could have touched it with my paddle had I wanted. It stayed long enough that I was able to get off a picture or two before it slipped back underwater & disappeared. HOW COOL WAS THAT!? I was so stoked and couldn’t wait to see my picture. From a distance we saw many more seals, sea lions, otters, wading and nesting birds. I was glad that I had my binoculars because they really made a difference in what we could see.  Once we turned back against the tide, we had to do some major paddling. I was glad I had taken so many pics on the way down because it was impossible to stop paddling and get a picture on the way back.  When we finally made it back to the harbor. I got a great picture of my sister with 3 sea lions that had popped up to look at her. As we cruised by the raft of otters I decided I would try and get just one more picture of them and THAT IS WHEN IT HAPPENED! 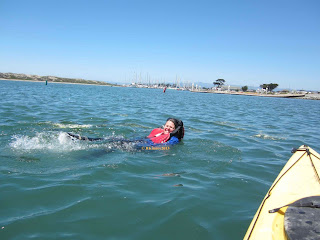 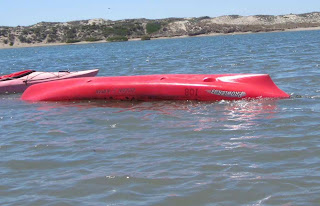 As I reached for my camera that I had tucked into my life vest, I saw my camera fall into the water. My world went “slow motion”. I gasped and reached to grab the camera as it started to sink. The next thing I knew, I was in the water spitting out salt water and my kayak was upside down! WTHey just happened, I thought as I realized that this water was pretty cold and I was swimming with the fishes and sea lions! Thoughts of all the things that I had discovered were in the water at the Monterey Aquarium all flashed before me as I splashed around with my life vest up near my ears to see where my sister was.  She was paddling my way & yelling ‘what are you doing!??’. I was wondering that myself! Another kayaker came to my rescue too, as we tried to turn the ‘most stable kind of kayak’ back over. It wouldn’t turn. I panicked a little more when I remembered my keys, credit card, driver license and phone were in the dry well that I only partially locked! I was relieved when I reached under the kayak to find that the latch had held. Thankfully my binoculars were still around my neck & sunglasses still on. My rescuers towed the kayak towards shore and flipped it over for me. I swam with the fishes & who knows what other kind of critters and eventually made shore so I could get in my boat and paddle back to where we started, where I drug my soggy self back to the outfitters mourning the loss of my camera. To say the experience was memorable would be an understatement! The loss of the pic of the Harbor seal and my sister with the sea lions still makes me sigh. I don’t recommend swimming with the fishes, I do recommend exploring the Elkhorn Slough by kayak if you get the chance. Its great fun if you manage to stay upright!