We were robbed by Masked Bandits!

After a nice evening listening to some light Jazz and getting a few things accomplished, I took dog out for her midnight potty in anticipation of winding down for bed.  Normally I  just let dog out the door since she knows the routine and goes straight to the back of the rig to potty & returns for bed.  For whatever reason, this time I felt like I should put her on a leash and go out with her.  Something immediately caught her attention under the rig but I pulled her away and told her to hurry up.  She obeyed & we went in.  I turned out the outside light, closed the shade and walked over to close my computer and then heard a strange noise.  I attributed it to a wind burst that must have blown something around outside.  Then I heard something again.  This time Dog got up and headed to the door .. as did I.   It sounded like someone was tampering with my rig!!!   I am thinking WTH, I still have my lights on & was just outside two minutes ago, who could be so bold or stupid as to pick a rig to rob where the people were up!!?   I flipped on the light & opened the shade & simultaneously heard a loud thud in the cargo bay to the left of my door.  I didn’t see anyone out there so I started to open the door only to find a grey body and striped tail on my top step!!   I shut the door quickly & continue to hear loud noises.  Again I am thinking, or I may have been even talking out loud at this point, “WTH!!??”

So what do you do when masked bandits are tearing into your cargo bay??  I tried to call the office at the County park I am staying at, but no answer and no referral for after hours emergencies. There continues to be loud banging in my bay and dog is going nuts, wanting to get out the door.  I try opening door a little & slamming it to scare it away.  Its still there …   I call 911, I explain to him my rig is being broken into by raccoons and that there is even one manning the step!  Being a professional he doesn’t laugh or hang up on me, but instead says he will send a car. 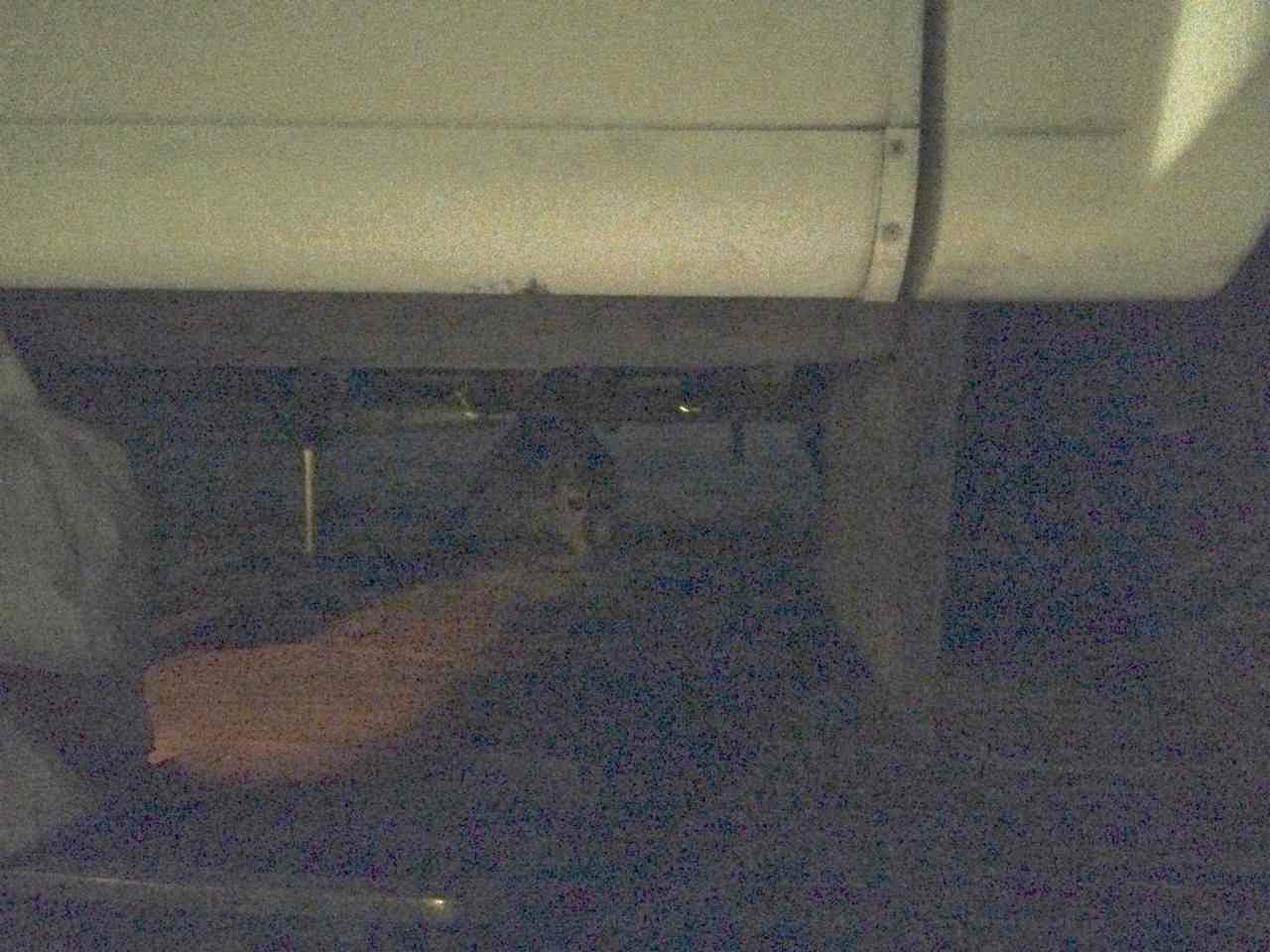 Eventually, the big clunking noises stop and I watch as a huge raccoon takes a drink out of my dogs dish outside of the door.   I only see one raccoon now, so I decide that I should sneak out my rigs driver-side door and try and shoo the bandit away.   It goes under the rig when it sees me.  I reach down & grab some seashells to throw (yes, seashells, this is Florida there aren’t rocks here just sand and seashells)!  It kind of plays chicken with me under the rig, until I actually hit it with a seashell.  I kind of felt bad when I hit it because I heard the thud and it paused and kind of looked at me like “Really? That hurt”.  Eventually I got it out from under the rig.  It headed for my water hose, where it stopped a took a drink out of a water leak (washing down its dog food buffet?) before trotting off towards the woods after one of my seashells actually got close to it again. 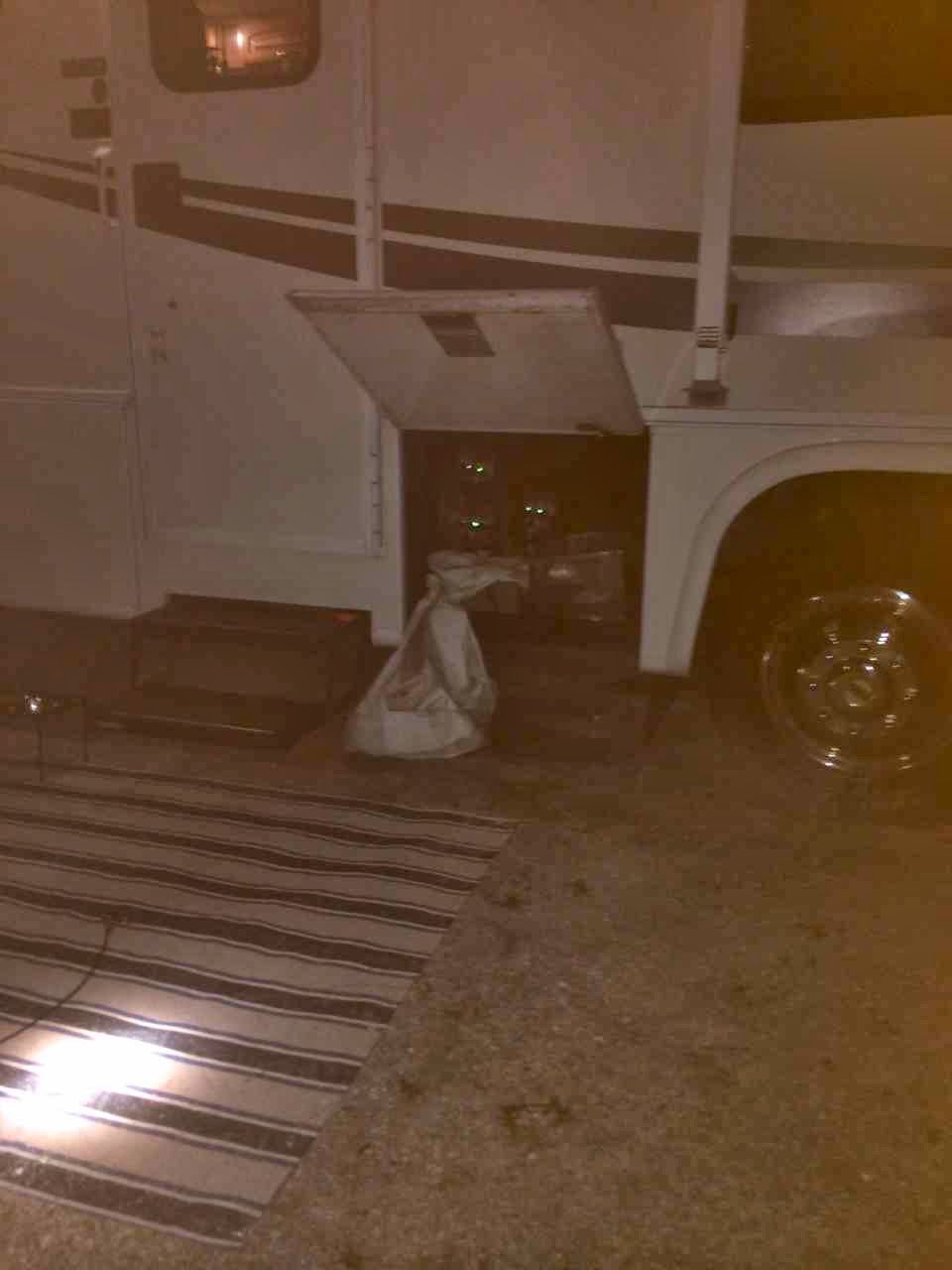 With it gone, I went to open up the cargo door and check out the damage.  That is where Dog’s food is kept in a plastic bin, so I knew that was what it was after.  As I opened the cargo door, I was shocked to see 4 pair of eyes looking back at me!!!  In fact I was so shocked, I might have even let out one of those ‘little girl screams’ .. though quietly, as it was quiet hours!  This time I had no “WTH”,  I was just speechless.  After all in 10 years of full-time RVing,  I have never had 1 raccoon in a cargo bay much less 4!  Hello! Four, LIVE, WILD animals IN my cargo bay!  They happily munched away on dog food and didn’t mind me at all!  Finally the park security guy shows up.  He has a flashlight & shines it on the bandits.  They don’t move.  I ask him what he is gonna do to get them out!??  He just smiles and shakes his head … he had nothing.. !  Grrreattt!!   As we backed up a little bit, one of the bandits starts to head down the tire cover that they have draped down out of the bay like a curtain.  Two more follow, but one is pretty darn happy munching on the dog food buffet.  Eventually, it leaves too.   I send the dog food with the security guy.  We decides that I shouldn’t lock the bay as they may come back and just try and tear it open.   I wind down and get to bed about 2 am.  At 2:30 am they come back and I chase them away and decide to go ahead and lock the bin now that they had a chance to see the food was gone.  They come back again at 5:30 am., this time they leave quickly and finally get a bit of shut eye.   Tonight the dog’s food will be locked in the car; hopefully it is a less eventful night!   Note: as I publish this .. they are back!!  sigh 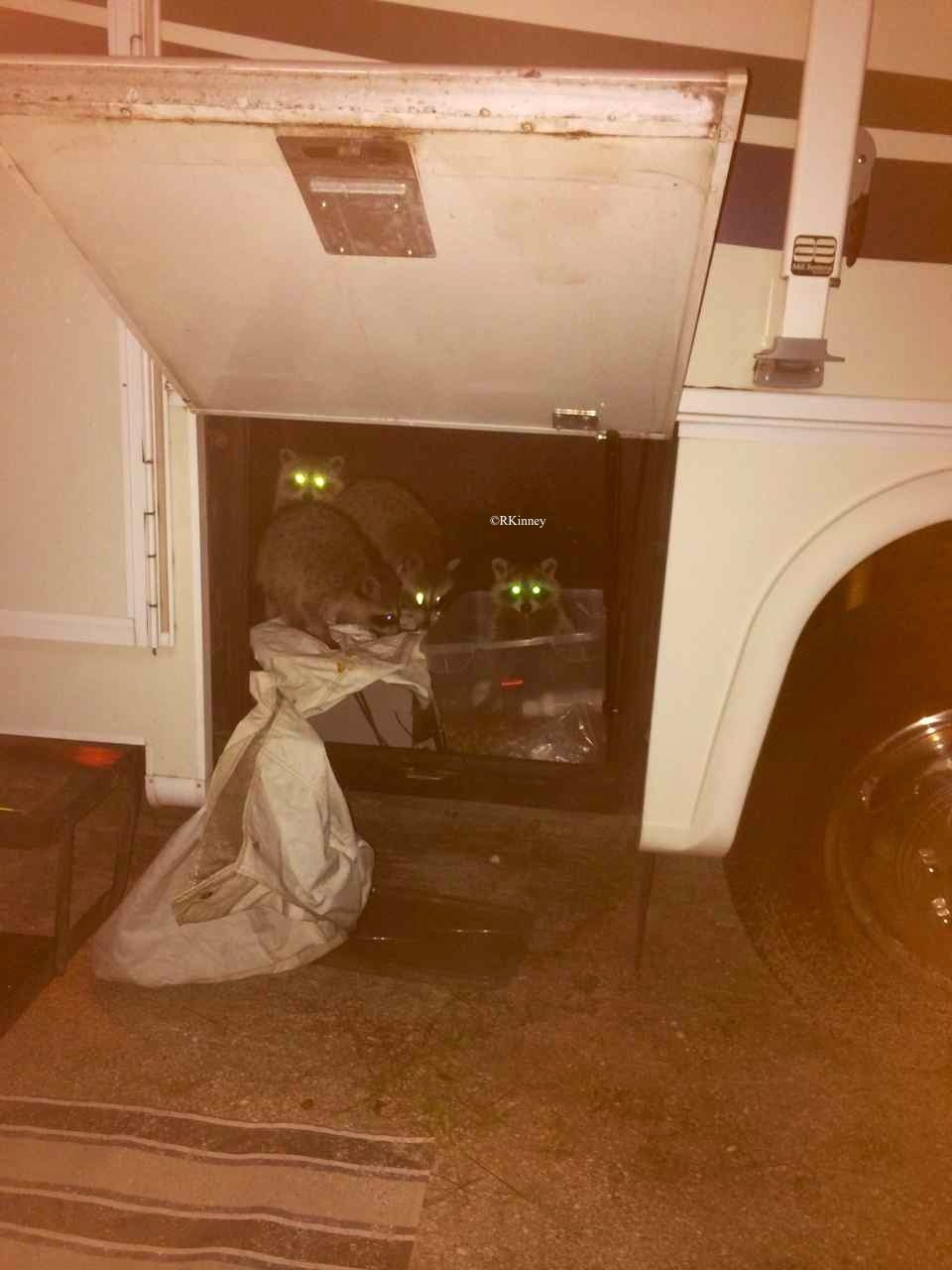