A Tenting We Shall NOT Go.. I need a Van 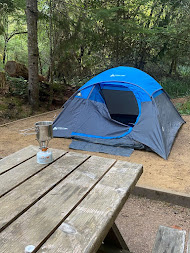 It’s been about a year since I had a horrid Western NY night in a tent and swore that I would never tent east of the Mississippi again.    I am on the west coast of British Columbia Canada and though I did not plan on camping, like a good girl scout I was prepared to if I needed too.   Getting a late start and ending up three hours from ‘home’ with night falling … I needed to.  Luckily, I scored a nice tent site in a better than average RV park near the coast of the Salish sea.  The camp staff had gone home so I just choose a place for the night that was empty.  Thankfully they had nice level tent boxes, and some friendly nearby campers gave me the washroom code (they call them washrooms instead of restrooms in Canada... so we will go with that!).  I quickly set up my Wally world tent as the last bit of light slipped away. 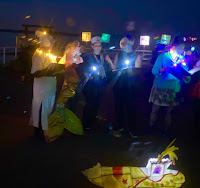 Running into the lady that gave me the washroom code at said washroom and chatting while trying to navigate in the dark back to our tenting area together, I learned that they were from the same town I had been housesitting in and were at the same festival I had been at days earlier.  Oddly enough she had been part of a singing group that I had taken pictures of that evening and I had a pic of her on my phone!  How weirdly wild is that! We concluded we live in a small world and headed in for the night.

The further away the bathrooms are it seems the more often I make the journey! These potties were in the RV area where people have their own potties and not the tent area where they do not.  I certainly wish some campground developers would consult some of us a little more before they build!  Anyway, on my next journey, prepped with my little bear spray canister, something rustled and bolted out of the bushes!  Fumbling with my phone and dropping my can of spray, I saw it was just mom and baby deer that scampered off ... or did they??  On my return, I kept hearing footsteps behind me, and I would stop, and they would stop.  Kind of creepy but after about 5x of this and being sure I was hearing what I was hearing, I slowly turned around to confront my stalker.  With a little glimmer of light outlining it, I could tell it was the little fawn with its ears up looking at me again.  Relieved I took a few more steps, and it did too, stopping each time I stopped.  Did it think I was mom?   Finally, I turned my flashlight on it and backed away and it stayed in place till a car moved through the campground scaring it off.  A little weird but whatever.  Strange things happen when you are out in nature, and it has been a while since I was out at night in nature.

I marveled at the stars; they were so numerous that you could hardly make out all the constellations. I took a deep breath of the pine filled air and called it a night, happy to be out enjoying nature. Quickly, I regretted not bringing my nice blow-up twin sized air mattress.  My ¾ length backpack pad was not as comfy as I remembered it.  Finally getting semi settled, I noticed something else... it was SUPER quiet. No choirs of frogs or locust singing like there is in the Midwest, no night birds, no planes, trains or automobiles either!  The loudest thing around was the tinnitus in my head, which seemed so loud that it made it hard to sleep.  Well, that plus the pondering about why there was no night sounds in the woods in Canada.  Still messing with the mat and listening to the chorus in my head at 3:30 am, I took another gander out to check out the stars.  4:22 am must have dozed off and may have yelped a little when I thought I heard a rustling and saw a nose poking the side of the tent. I think I was dreaming but the yelp part may have been real since another camper came out with a flashlight, intently shining it my way a little bit later.  I stayed still and didn’t offer an “I am sorry, did I scream and wake you” apology as I know a Canadian would.  Instead, I was just grateful I was dreaming which meant no bear maybe was sniffing around and maybe I had actually gotten some sleep.

I spent some time pondering why I still thought tenting was a good idea before finally dozing off around daybreak, just in time for the neighbors to start stirring for breakfast.  Ahh the great outdoors.  As I made my morning journey to the washroom, I noticed the RV and Van folks all around looking happy and well rested.  I squeezed out an exhausted smile as I passed them on their merry way’s but resolved myself to no more tenting in Canada either!  I need to try nature from one of those new Van’s next time with a real bed and my own potty!